There’s a long list of benefits for switching to plant-based alternatives, so it’s no wonder this market is a rapidly growing industry.

When you walk down the milk aisle at your local grocer, you’ll probably see cartons of milk plastered with images of happy cows wandering in fields of lush grass. The sad reality is, these images could not be further from the truth of what really happens on dairy farms. Just one tragedy that occurs as a result of dairy farms is the slaughter of calves. Newborn calves are usually separated from their mothers within hours or days of their birth, and most of the time they are considered to be a surplus by the dairy industry. These newborn calves are referred to as “bobby calves”. Because bobby calves are considered to be a waste product by dairy farms, hundreds of thousands of calves are slaughtered in Australia each year.

In terms of water conservation, soy milk requires the least amount of water to be produced compared to the other popular milk options.

Almond milk is one of the most common plant-based milks on the market. It is much lower in calories than milk from cows, where one cup of unsweetened almond milk contains around 20-50 calories, versus 146 calories in a cup of cow’s milk. Additionally, almond milk is typically higher in vitamin E than most other milks.

Almond milk has one of the lowest carbon footprints of all milk options. However, it is also worth noting that producing almond milk requires significantly more water than other dairy alternative milks, but still less water than milk from cows.

Oat milk has emerged as a trendy alternative to dairy milk. It can be a great source of vitamins and minerals, and is particularly known for its amount of fibre. Oat milk is also typically fortified with vitamin B12, vitamin D, vitamin A, and calcium.

Similarly to soy milk, oat milk requires a tiny fraction of water to be produced compared to dairy milk. Oats are also considered a low-input crop, meaning that it can reduce soil erosion and lower the risk of plant diseases in their crop.

Coconut milk is a popular milk alternative for people with food allergies, as it is naturally free of soy and gluten. For those looking to avoid carbohydrates, coconut milk is a great option as it contains less carbs than nut or grain-based milks, while being higher in fats.

Coconut farming has a much lower impact on the land than dairy farming, partly because it requires planting trees to produce coconuts, rather than having to deforest trees.

When there are so many accessible dairy alternatives available, making the switch to vegan milk products has never been easier. To find out more about how ‘Til The Cows Come Home is saving unwanted calves, read our article about “Why we have so many calves coming into our care.”

PrevPreviousWhat’s the Difference Between a Bull and a Steer?
NextAdopting A Farmed Animal – What You Need To KnowNext Are eggs really cruelty-free? The truth behind egg farming

“We got to the farm, and it was shocking to see how roughly the farmer was treating the hens. He was holding three chickens in 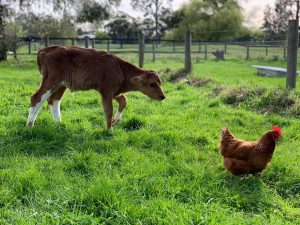 Different Types of Rehoming We Do

Next to rescuing and rehabilitating young or sick animals, finding forever homes for them is the most important part of what we do at ‘Til The Perks of Volunteering at an Animal Charity

Volunteering comes with countless benefits, and volunteering at an animal charity, in particular, has its unique set of perks that we think every animal lover 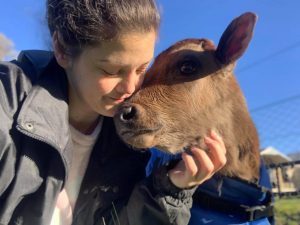 How You Can Get Involved With ‘Til The Cows Come Home

Millions of farmed animals such as cows, hens and goats are slaughtered every year in Australia’s agricultural industry. Farmed animals are among some of the Why We Have So Many Calves Coming Into Our Care

You may have noticed that the calves coming into our care are mostly males.  Here are some of the reasons why we are so frequently Farewell and Thank You to Donna Wild Winter Essentials For Your Animals

Winter is well and truly here! While you are rugged up inside with a hot cup of tea and a warm blanket, have you done Cock-a-doodle-doo! It may not be dawn, but it is time to debunk some of the biggest myths about adopting a rooster. If you’re thinking of Why You Should Consider Switching To Plant-Based Milk

There’s a long list of benefits for switching to plant-based alternatives, so it’s no wonder this market is a rapidly growing industry. The dairy industry